We left Lady Musgrave before sunrise this morning, heading for Gladstone where we will sit out first a string northerly, followed by strong southerlies, all kicked up by the nasty East Coast Low heading for Sydney.

Having thus far been spectacularly unsuccessful on the fishing front, I had replaced the line and lure (blaming my equipment!). Around 10AM we had a bite, and a fight on our hands. Sitting under the dinghy hanging from the davits, I finally landed the beast, much to the boys’ excitement. Redeemed myself! My ego was further boosted hearing Oscar tell his friend on the phone later “and you know what else is awesome about my dad?”! 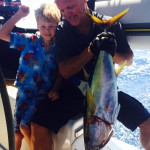 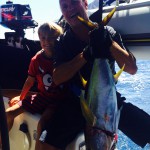