From the veldt – green beyond for miles stretching out ahead of us. Springbok and huge beef ranches.
Apparently tomorrow the countryside will be so impressive that the last few weeks will pale into insignificance – so I’d best remind myself of the tremendous time we’ve had since leaving Windhoek a couple of weeks ago (almost):
– geology and veldt that changed with each escarpment or cutting through rock as we made our way along roads;
– roads that went from sealed tar roads to wet sand, to gravel where the grass grows from the edges in towards the middle, with the spoor of various wildlife having left their mark. And then as we headed from near the Botswana border back to the west coast we drove across desert – with no one else – and then on to the (somewhat bizarre) salt roads from north of Henties Bay to Swakopmund.
We spent almost a week on Bospoort farm (between Gobabis and Summerdown) where the giraffes came daily to feed in the (350 hectare) ‘paddock’ next to the homestead; where Manie presented the boys with their own handmade catapults, where the boys learnt to shoot rifles and where they fell in love with the working sheep dogs Max and Moritz. Oscar rose early each morning ( long before anyone else) desperate to be out there ‘doing farming’; driving out with his Uncle Fanie to check fences and water troughs and then helping Julius and Manie fix broken fences. He was in his element and at his happiest – busy and with animals, who don’t judge him but accept him for his quirky ways and most of all for his generous love and kindness. We listened to jackals at night and ‘go-way’ birds during the day; had Easter egg hunts and did obligatory egg decorating/painting; we rode quad bikes and travelled in the back of the ‘bakkie’, we ducked from camel thorn trees and hunted for dung beetles – and then we left and headed on more amazing roads across country and made our way to Erindi Game Reserve: the most impressive campsite ever! From there we saw game, African Wild Dogs, elephant and hippos and searched for lions (I found lion when in desperation I went on a game drive one afternoon). And then by chance we headed to the San Village for a tour one morning – fascinated with this nomadic tribes way of life. By chance the big storm came later that morning as we drank coffee at the Lodge and watched hippo and crocodile move through the water and respond to the massive electric storm overhead – and then by chance we were entertained by three elephants who arrived at the watering hole – an experience for us all. The elephants knocked crocodiles out of the way and into the water. Then the elephants pushed each other into the water and continued in some ritual which was either playful or in order to decide the pecking order – we were never sure which.
The rain poured that night, with lightning everywhere around us – so much so we pulled the boys out of their damp tent and popped them in the back of the land cruiser to sleep – which really pleased them – another ‘first’ on the list of experiences. Gerhard and Fanie attempted to keep the braai burning so that we could cook the meat for dinner (fuelled by alcohol to keep warm); we ate dinner perched on chairs in the shower and toilet (with plenty of wine!).
From Erindi we headed into the desert and onto Swakopmund – which despite clearly being a significant town (second largest in Namibia) I found it rather odd. There’s a constant cloud/mist that hangs over Swakopmund. It’s on the edge of the desert with the most fabulous dunes (including the infamous Dune 7 – well done Hugo for scrambling up that hot one bright sunny morning).
Swakopmund was very German (as per colonisation) and so many of the houses have a very German look and there are some fabulous restaurants serving humongous size portions of delicious food (put off the diet for another week then…and let the belt out another hole!). But it all looks a bit dishevelled and in need of some tlc. I was assured that it shines during the summer months when it ‘buzzes’ during the holiday season …it is Namibia’s only coastal resort….but I still felt a bit intrigued by the place.

I’m getting a bit boring with marvelling at the beauty of South Africa – so I’ll bore you with Namibia instead. We left early from Langebaan as the sun rose over Table Mountain – way off in the distance. We were heading north for the Namibian border, over the Orange River. We saw little traffic all day – other than when going through enormous stretches of road works (cutely referred to as ‘stop – goes’). Luck was on our side and the really early start paid off, as we were hardly delayed at all by them – and don’t think we slowed our speed because of the road works …doesn’t seem to work like that round here.

We drove over mountain passes and straight roads that stretch beyond for miles (we only talked about Australian roads being long, straight and empty when I grew up – no one ever referred to the South African ones: clearly an oversight). We saw ostriches and flamingoes, dassies (like guinea pigs) and meerkats, wild goats and sheep. I have no idea what the latter were eating – it was wild rocky desert. I reckoned they must calculate their stock levels on how many acres per head, rather than the normal ‘how many head of stock per acre’. I don’t think farming out on these never ending wild and barren mountains is an easy life.. And then saw a combine harvester! What on earth was that doing parked up here? We did see ‘paddocks’ with large rocks and something that looked a bit like stubble in them – but I’ve no idea what on earth it was (need to ask my brother in law).

And finally we drove down into the valley of the Orange River and out of South Africa, green and fertile, grape vines and fruit trees. The heat hit us as we joined the queue in a cramped and airless room waiting for our papers and passports to be approved by the Namibian officials, and then another queue for the foreign car papers, and finally the queue to get through the border post. Thankfully we weren’t subjected to the car being emptied and checked over – unlike some of the cars ahead of us. Hugo was most concerned: we’d warned him that if he was cheeky and impolite to any of the border officials they might pull the stuffing out of his beloved teddy to check for drugs. He was aghast – and behaved impeccably!

And on we drove through hot dusty desert to Felix United. Gorgeous staff, thatched cabanas to stay in, chilled wine and cool beers overlooking the river whilst the sun set behind the mountains, a warm wind blew and the boys played (noisily!) in the pool. Bliss!

We are back at one of our ‘bases’ in the Cape. The boys are having a post-school swim in the estate’s swimming pool. I continue to marvel at the beauty of South Africa.

Having made friends with children at a harvest festival at one of the local vineyards, we followed up with a post school play date with Oscar’s new found friend Zara…at a garden centre/vineyard/piggery! Stunning grounds and gardens with play equipment for the children to safely occupy themselves. Public parks in towns do not as a rule seem to be the place to play…

We returned to Langebaan on the coast on Saturday morning and whilst the boys listened to stories and read books I continued to marvel at what a truly stunning country this is.
For a country where there is a state of paranoia, and a very complicated political (and consequently emotional) environment and where abiding by the road rules is hardly given a second thought it is an incredible place to drive. The roads are wide and fast. Wide hard shoulders means that drivers pull over onto them to allow you to pass/over take. You flash your lights to say thank you, and they flash to acknowledge you. Vehicles coming the opposite direction, if finding you on their side of the road don’t honk horns and gesticulate whilst shouting obscenities (as in Australia) but they move over towards the hard shoulder so that everyone can get through and get on with the day.

People pay attention when driving over here – you have to. I was marvelling at this as I drove at 130km/hour along the back road – not fast enough to catch up the pickup/ute/bukkie half a kilometre ahead of me, but clearly not fast enough for the Audi that came flying up behind and past me!

Meanwhile the rolling fields stretched for miles around me, wheat fields combined and in the process of being cleared of straw bales, cattle and sheep (with ostriches or donkeys grazing alongside them to protect the stock from African wild cats). It is a country of breath taking beauty. 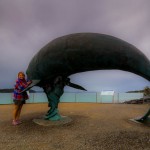 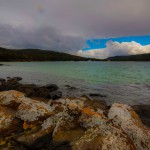 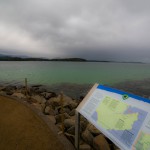 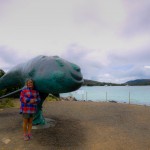 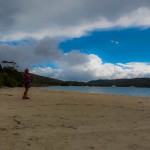 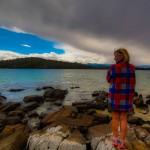 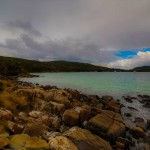 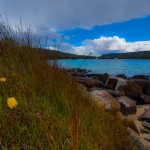 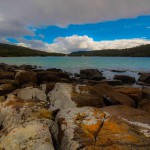 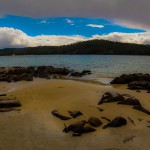 
It looks cold doesn’t it? Well believe me, it was! We spent the long weekend at a B&B in Geeveston (Bears over the mountain). It was a great location in the wilderness of Southern Tasmania. The landscape was breath-taking. It really felt like frontier country. And it felt just a wee bit cold to us.
We travelled to the ‘end of the road’. We were at the southern most tip of Australia. We were now closer to Antartica than to Cairns. And that’s what it felt like. The water was crystal clear but looked positively freezing. The bays were protected and peaceful. Lots of (clearly very tough) families were having their last bit of the summer holidays camping down in this stunning countryside, gathered around roaring camp fires…and then we spotted…a little girl trotting across to the beach in her swimmers with a boogie board under her arm (??really!) and low and behold an ice-cream van! Even if we hadn’t just been sailing the Queensland coast I would still thought it was a tad chilly for swimmers and a dip in the waters of what is basically the southern ocean. That aside it was a magical place.
The whale sculpture is in recognition of the whaling history. During the 1830s there were 4 whaling stations at Cockle Creek. During the 1840s the Crown granted seven leases for the establishment of bay whaling stations in Recherche Bay. But whales had been hunted with pregnant cows and calves indiscriminately slaughtered. They apparently slaughtered the calves first so that the cows would wait around the bay and cry for their young, and then be slaughtered too. Tragic – but a beautiful sculpture.